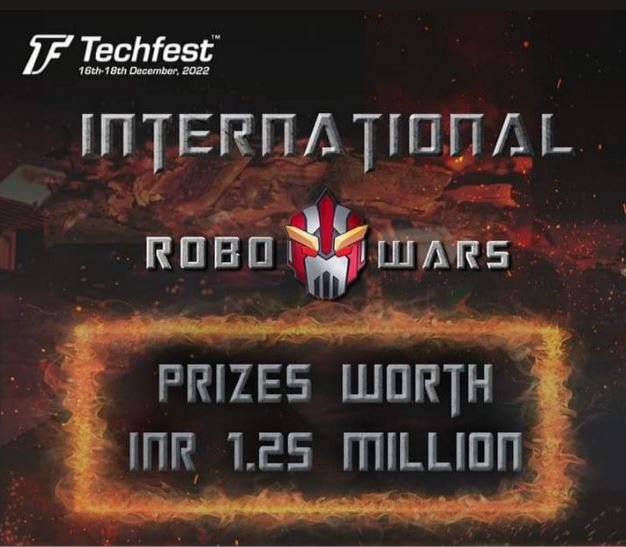 Techfest, IIT Bombay garnering International Participation from all across the globe

IIT Bombay is gearing up to host the 26th edition of its science and technology festival from December 16, 2022 to December 18, 2022. With the launching of the international Robowars, full throttle, and micromouse competitions, teams garnered a lot of attention from teams both domestically and abroad. Do you want to know more information on this competition? If so, read on to learn more about each of these competitions in the sections below.

The International Robowars is the biggest robot combat competition in India, where 100+ teams from around the world, including those from the USA, Russia, Germany, Iran, Brazil, Nepal, and Bangladesh, will pit their robots against one another in a metal cage until one is victorious and receives the coveted Robowars Champion Title.

The audience has the opportunity of a lifetime to watch live sparks fly as metal crushes metal in the most epic combat interspersed with spectacular artist performances for non-stop entertainment, with prize money totaling more than 12.5 lakh rupees as an added incentive.

India’s largest RC nitro buggy racing event is currently the International Full Throttle. Riccardo Berton, a champion in the Nitro Buggy with a World Rank of 11, and Max Mört, from Finland with a World Rank of 66, will both be present at this year’s competition. Teams from all around the world race against one another for a chance to win INR 1,30,000 in prizes.

Here in this competition, participants compete to create an autonomous, self-contained robot that can reach a maze’s center in the shortest amount of time, with a prize pool of INR 1,000,000. To solve a maze that has never been seen before, more than 70 teams from around the world participate. They must use only sensors to determine whether or not border walls are present in order to go to the maze’s center.

On the IIT Bombay Campus, these competitions against teams from around the world will take place from 16th-18th of December 2022-23. Most importantly, the event is free and open to all.

Wazid Khan to be the judge for “Toolika”, the Fine Arts Event of Kashiyatra’23

Vaibhav Pande to be the judge for “Samwaad”, the Literary Event of Kashiyatra’23